The Bow Gear | Best Bow & Archery Info In One Place

What is a Crossbow? How does a Crossbow Work? What are the different types of Crossbows? These are some of the frequently asked questions by young hunting enthusiasts, and the purpose of this article is to address them one by one.

The crossbow is a complex hunting weapon that has been used by people for centuries. Most hunters and long-range shooters prefer crossbows because of its exceptional speed and impact. However, if you’ve ever wondered how this beast works, the answer lies in this post. Keep reading, then!

But, Before we explain the working mechanism of the crossbow, first dig deep into the history and evolution of crossbows. 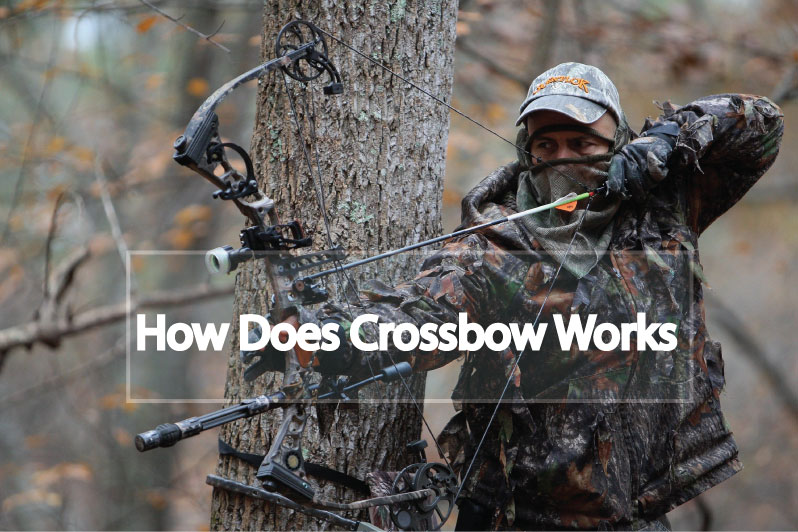 The Crossbow is basically a modernized version of the classic arrow and bow. The early crossbows date back to the 5th century B.C.; they were invented by the Chinese, and since then have become a very common weapon of war. The Chinese then converted them into repeating crossbows.

Repeating bows were just like an old burp gun with an ammunition case to carry the bolts. It has a single handle for cocking, priming and firing the arrow.

Composite crossbows were afterward used in Greece known as Gastraphetes. In order to load these, the user has to lean with his stomach on the rear end of the weapon, and push it down.

Eventually, this innovation led to another one, the Oxybeles. Basically, this was an oversized Gastraphetes, except that it was on a stand. Greek also used repeating crossbows and called them Polybolos. However, unlike the Chinese crossbow, it has a crank to fire the arrows.

The crossbow then evolved through the centuries into a more effective and lethal weapon and arrived in Europe. It was also a valuable weapon in mediaeval times that almost substituted the conventional bow and arrow.

Although crossbows have evolved from the bows, they are relatively easy to learn and use. While it requires extreme skill and strength to become an expert Archer, enthusiasts could learn it in no time.

Crossbows are still being used by several countries in special operations when precision and stealth is necessary. It is also used by special forces when they intend to hit the single target while minimizing the overall damage. Crossbows are mainly used for game hunting and other target shooting sports. we have covered the best crossbows for hunting for your ease.

Now we know how and when Crossbow was invented, and how it transformed into the weapon we know today. Now the next question arises:

What is a Crossbow?

In simple terms, Crossbow is just a horizontal Bow mounted on a long Stick and it shoots bolts to hunt down the target. However, the design of the crossbow is somewhat complex and interesting, incorporating multiple features to enhance the efficiency of the weapon.

It’s a perfect blend of a conventional bow and a rifle. Like a bow, the crossbow incorporates a string system to fire a projectile. And just like a rifle, the crossbow features a trigger and a long stock.

In recent times, the crossbow has undergone a revolutionary transformation in design, construction and functionality. With innovative design, complex mechanism, and innovative features, modern crossbows differ greatly in their intent of use compared to their ancestors. The Bow part of the Crossbow is commonly known as Prod and it is oriented horizontally.

The Prod part is attached to a vertical part known as stock or tiller. The stock is the part which the shooter holds while firing arrows or bolts from the Prod.

How Does Crossbow Works?

How does a crossbow work? Well, Crossbow is very similar to Bow and Arrow i.e. to target fast-moving or static objects from a distance. However, the main difference between them is the structure and trigger mechanism.

While an arrow needs to be pulled and released from the bow, the crossbow has a trigger and locking mechanism which enables the user to fire the projectile at their will. The crossbow also has a stock for better support. Well you can check our guide on How to Make a Crossbow Trigger ( with Simple Steps)

How to shoot with a Crossbow?

Unlike the traditional bow and arrow in which you require drawing and releasing the arrow towards a target, the crossbow implies cocking and loading an arrow.

The modern crossbow employs a safety mechanism that should automatically apply each time a crossbow is cocked. However, like other mechanical devices, it has a possibility of failing and bearing catastrophic results, so the user must be highly vigilant.

Crossbows must also be de-cocked after usage. This implies firing the loaded bolt to a safe and close quarter target. Dry firing the crossbow can have serious implications to the crossbow’s frame.

Since the string of the crossbow has a significant amount of energy required to launch a bolt, not having a bolt to launch can break the crossbow’s limbs.

Another important thing, unlike the traditional bows that fire arrows, modern crossbows throw the bolts. Bolts are somewhat similar to arrows; however, they are normally a little shorter and heavier. The heaviness of the bolt enables it to attain the peak kinetic energy quickly when fired.

How does a crossbow work with a traditional bow mechanism? Well, crossbows were introduced in Europe in medieval times and have therefore existed longer than rifles and cannons. They have been used in wars and for hunting. If someone requires to use arrows but requires the feel of a rifle, the crossbow would be the ideal weapon of choice for them.

A user would have to cock the arrow using a rope or their bare hands and then fire the trigger while aiming towards their targets. Since there were no accuracy enhancers such as sights or telescopes, the accuracy of the projectile was highly subjective. The projectile range was also subjective to the strength with which the crossbow was cocked and the material used in the crossbow’s pulley.

In the past, the crossbows were made entirely of wood with flexible cords used as bows. Often metallic components would also be used with wood to increase the strength of weapons such as arrowheads, locks limbs and triggers. Such crossbows were very heavy and difficult to operate.

Over the time, the materials used in making crossbows have evolved. While the underlying mechanism of the crossbows has not changed, assistive tools such as telescopes, sights, safety locks, a variety of arrowheads, and assistive tools for cocking have been created, which create immense ease for usage. Instead of wood and metals, carbon fiber is now being used which is a very light, robust, and strong material.

Therefore, today’s crossbow is in almost every way, lighter, more accurate, and easier to operate than the ones produced in the past.

The Crossbow: How does it Work?

Crossbow is the most powerful weapon used by hunters and experts. Crossbow contains parts that are used to increase draw weight and length. These are listed below

Parts of a Crossbow

Now, let’s briefly discuss the important parts of a crossbow:

Stirrup is a frame made up of metal at the front of the crossbow. It is used to secure the crossbow while cocking by placing the foot inside it.

A stock is a vertical body of the bow, and all the other components of the crossbow are mounted on it. The front part of the stock from where you hold the weapon is known as foregrip, whereas the rear end that sits on your shoulder is called butt stock.

The limbs are like the wings of a crossbow. They provide the power to the bow by flexing and storing the energy to launch the bolt. Modern Recurve crossbows boast limbs that are curves, while Compound crossbows have a little complicated pulley and cam system.

The bowstring is basically a string that connects both the limbs and transfers the power to the bolt.

The rail is the upper portion of the foregrip. This is the area where the arrow is mounted and the bowstring moves over it.

Like rifles, Crossbows also have a trigger system, which is used to release the latch that is holding the bowstring. The trigger assembly also has safety features to prevent accidental fire or any other mishap.

What is the maximum Speed and Range of a Crossbow?

There really is no straightforward response to this question, as both of these factors rely primarily on the type of crossbow and Hunter’s shooting skills. Although a crossbow is just like a rifle with a stock and a scope, it comes nowhere near the range and speed of the actual rifle.

Modern crossbows usually produce speeds somewhere between 280 to 350 FPS, with some variants ranging up to 400 FPS too. The question is not how far a crossbow can go; the right question should be what is an effective range of a crossbow.

If you are using a 300+ FPS crossbow, the typical effective range of hunting is 50 or 60 Yards. You can certainly go further than that up to 80 Yards to bring down medium-sized games, but it wouldn’t be as effective.

While it is quite possible to hunt down a bi game from 200 Yards, it is not really recommended as it is not going to be a clean shot. It’s not a matter of pride how far you can shoot a Crossbow if you don’t make a clean and humane kill.

Therefore, practice more to find the effective range of your Crossbow and chances are that it will not be more than 60 yards.

There are various types of crossbows available in the market. Each of them utilizes different designs, constructions and is intended for different applications. Such as:

A recurve crossbow is the most ancient crossbow known around the world. As the name suggests, it has subtle curves at the far corners of the bow, pointing away from the user. These curves also act as a lock, which prevents the string from flocking out when the bow is shot.

A compound crossbow is an improved and complicated version of Recurve crossbows. It is basically a blend of a combination of the vertical bow, the compound, and the modern rifle.

This is a cross between a crossbow and a modern-day rifle and is crafted to offer better aim and accuracy to newcomers. It’s a lot narrower and portable than other crossbows, built for long range shooting, and could aim from a reasonable distance.

Pistol crossbow is a smaller and lighter version of the conventional bow. It boasts a pistol grip and you can also fire it using just one hand. These small portable crossbows are often used to shoot small bolts with on short ranges for hunting small game and backyard practice.

Crossbows are a deadly and extremely powerful weapon. People all over the world use it for game hunting and target shooting. It’s a complicated version of a simple bow and arrow, but with a short, shallow learning curve.

Once you know how various parts of your crossbow operate and how to use it safely, it’s a perfect way to have some fun when out for the hunting. However, just like every other weapon, you should know your state laws about the use of crossbow hunting before you use it.

The Bow Gear is a participant in the Amazon Services LLC Associates Program, an affiliate advertising program designed to provide a means for sites to earn advertising fees by linking to Amazon.com and other Amazon websites. As an Amazon Associate I earn from qualifying purchases.  All product names, logos and brands are property of their respective owners. We sometimes get a commission through purchases made through our links at no cost to you.